Okay I guess I've been neglecting the blog as I do all my news updates on Steam these days.  But in case you somehow found this site without finding the Steam site first, Survivalist: Invisible Strain is now out in early access on Steam!
Posted by bob at 07:05 No comments:

As I've mentioned before, I'm working on a sequel to Survivalist.  I'm still playing with the look and how everything's going to work, and not ready to show a lot of media from it yet.  But here's a screenshot I took about a month ago that I kinda liked and felt was worth sharing. 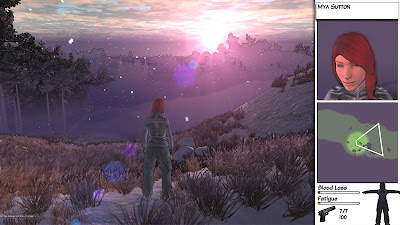 There's now another place to buy Survvialist - itch.io!  Naturally you'll get a Steam key if you buy it from there, but you also get a DRM-free download.

(Note - you do need Steam to play online co-op though, as I used their servers and API).

A bittersweet goodbye to XBLIG

Last weekend was the beginning of the end for XBox Live Indie Games, the platform that Survivalist first released on in February 2014.  From now on no-one will be able to release new games - or upload patches - on the platform.  In one year's time, September 2017, you won't be able to buy new games either, though what you have already bought will of course keep working.

I say "from now on" no-one will be able to release new games or upload patches, but actually we've been having considerable difficulty doing that for the last few months.  Due to a bug in Microsoft's server, every upload has had to be manually 'fixed' by an engineer, and these engineers are usually kept busy with tasks that are higher up on Microsoft's priority list, i.e. XBox One.

Back in June I released a patch for Survivalist, v56.  This had some fixes for bugs with the Online Co-op patch, released the previous month.  Unfortunately due to the server error and lack of support, v56 only just become available for download on XBLIG last Friday.  Here's what's in it:
Later, in July, when it seemed like nothing was happening with v56, I tried to upload another patch, called v59.  It passed peer review but has not been applied on the server and at this point I doubt it ever will be.  There are technical issues on those servers that I don't think even Microsoft's engineers understand.

For a list of what would have been in v59, see the news post on Steam.  It's really a shame, because I felt like was coming to the end of what I wanted to add to Survivalist anyway, so v59 would have been (almost) the definitive version.  Now that will never be available to XBLIG customers.

Anyway in spite of all that I feel some credit is due to the engineers - and their spokesperson Jessica - who have been working on fixing our uploads and just barely holding XBLIG together with bits of string as it stumbles over the finish line, with apparently very little support from Microsoft.

For myself, I'm still somewhat proud of the fact that I got online co-op working on XBox at all, though I'm afraid it was a bit rushed to meet the deadline and there are some issues with load times and framerate.

And for XBLIG itself, so long old friend!  I started developing Survivalist in August 2009 and for five years I only played it on my XBox 360. In that time XBLIG went from promising new experiment to abandoned failure, in Microsoft's eyes, but I kept working on it.  What an insane thing to do, in retrospect..!  In the end Survivalist was never a runaway success on XBox 360 but nor did it sink without a trace, and it got me enough fans and support to help me to pass Greenlight and release on Steam, which in fact has really changed my life.  I'm currently working on a sequel.

Online co-op is live on Steam!

After many months of work I've finally made the online co-op patch live on the main branch on Steam!  You can read about it there.  It's currently also making it's way through the XBLIG peer review process so hopefully it'll be available on XBox 360 soon as well.

Here's the changelist, which also includes a few wishlist items people have mentioned to me and fixes for bugs that have been reported:

So I'm still aiming to get online co-op into the XBox version before it sunsets.  Once I've got it working on Steam it shouldn't be too hard to port it over.
Posted by bob at 17:50 No comments: