Survivalist has made a couple of people's year-end best-of lists:

Survivalist has been Greenlit on Steam! + XBox 360 Christmas Sale!

Yes, as of yesterday evening anyone who logs onto the Steam Greenlight page has been greeted by this glorious sight:

Many, many thanks to all the people that voted.  Special shout-out to people who'd played the game on XBLIG, Desura or IndieGameStand and came to write positive comments about it on the Steam page.

So what's next?  I'm hoping I'll be able to get it out out Steam pretty quickly - within the next month would be my goal.  I'll need to integrate Steam Achievements with the Awardments system I just added, and I guess there might be a few other Steamworks features worth taking advantage of.

I also still have my to-do list of bugs and suggested improvements to work on - although I'm hoping to come to the end of it soon, or at least draw a line under it.  One thing I may add is an alternate set of default controls based around the WASD keys instead of the arrows - and a screen the first time you play it asking you which scheme you'd prefer - as it seemed that hard-to-reach keys was a fairly common criticism of the PC version.  If you have a preferred key layout, please post it in this thread by the way.  My guess is that most hardcore PC gamers probably prefer WASD, but I'm reluctant to just make it the default outright because, well, the arrow keys have arrows on them...

Meanwhile, on the XBox 360 the latest patch has passed peer review!  This means the changes from v23, v24 and v25 are now on XBLIG: that includes the Pause/Fast-Forward modes, the ability to craft Bandages from Cheap Vodka and Rags, Concrete Watchtowers, Awardments and the Cheat Menu being unlocked if you complete the game.  Plus there's this: 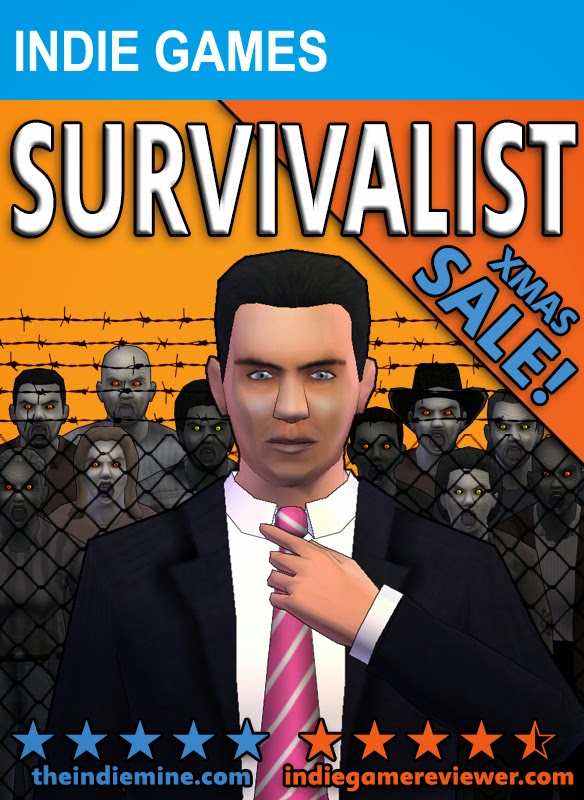 Yep, I'm doing a sale on the XBox 360!  Over the Christmas period Survivalist for XBLIG will be sold at the lowest price point - that's $1.00 in the US, or 69p in the UK.  The idea behind this was supposed to be to promote the Steam Greenlight, but now I don't need to - woohoo!  However I figure since the PC people have had their various bundles it's time the XBox 360 folks had a turn.  The plan is to return to the $2.99 XBLIG price point sometime in January - so get it cheap while you can!
Posted by bob at 16:39 No comments: